We cannot get rid of employers and slave-driving in the mining industry, until all other industries have organized for, and progressed towards the same objective. Their rate of progress conditions ours, all we can do is set an example and the pace.

Nicky Wire in the Quietus reviews (previews?) Rewind The Film.

Of course, having put away excitement and belief and other childish things, I no longer await a new Manic Street Preachers album with the same starry-eyed avidity I once did. (Do you?)

On the title track and its accompanying video, I liked what Lost Communication had to say:

While I don’t doubt that the video portrays places, issues and themes that the Manics hold dear to them (as do I), I fear they have fallen into the trap of adding a romanticism to the ‘noble decline’ of the industrial heartland of Wales. There should be nothing romantic in portraying how working class communities have feebly clung on to life after being chewed up and spat out by a succession of neoliberal governments.

… and I’d add only that the swampland that lies between mawkishness and sentimentality is a thoroughly Welsh place to get stuck. On at least one of the tracks discussed in the Quietus interview, though, ‘30 Year War’, the band seem to succeed in side-stepping the rose-tinted ‘noble decline’ trap:

“It’s not about Thatcher, it’s definitely about Thatcherism, about the establishment across the last 30 years, and it doesn’t matter what government is around, we always love to portray ourselves as this holier than thou country, and yet we have scandal after scandal uncovered, right to the root of power, government, Murdoch, the police, Hillsborough, this stupification of the class I grew up in, which I think all stems from Thatcherism really. The idea that if you break down any power that we had we’re going to be fucked forever…

I find that elitist, ‘We know what’s better’ is so all pervading, from the monarchy to fucking Cameron to Mumford and Sons. We’re just told… what did one of Mumford and Sons say the other day? ‘Either ignore it or celebrate it.’ What a fucking futile attitude. Don’t say anything bad, just ignore it or celebrate it. So what about fascism then? We don’t like it, we’ll just ignore it. It does feel like the last five years has been such a redress of monarchy and establishment and public school through all points of our culture. I feel a bit helpless about it.”

Bang on, of course, as is everyone else who appears to be waking up and wondering what went wrong after the Old Weird Nineties (that Mumfordian ‘ignore or celebrate’ ultimatum is straight outta Cool Britannia, although much of that era was more notable for its ability to do both at once).

I’m glad that bullish bullshit detector of his endures to an extent. It’s encouraging that the disingenuous and damaging nature of both austerity and austerity chic is being increasingly noted, but the lack of analysis and alternatives are still too glaring for this to be any more deeply gratifying. Not that analysis or alternatives have ever been the preserve or the responsibility of rock stars. 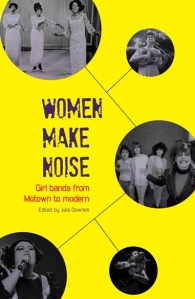 I am in print this month, having written a chapter on women in post-punk for Julia Downes’ new history of the girl band, Women Make Noise. A surprisingly difficult part of this was establishing what we talk about when we talk about post-punk. Post-punk’s disorderly, subversive and category-resistant nature has seen it marginalised in accounts of its era, although the past few years have produced a handful of useful retrospectives, as well as the early-2000s revival of post-punk musical techniques which, if you still can’t explain what it is, at least make it easier to explain what it sounds like.

For me, a large part of post-punk’s significance was that it seemed to involve an unprecedented amount of women as artists, fans, critics and ideologues. Extending the gains of punk’s emphasis on DIY culture, accessibility and amateurism, post-punk women were able to take their bands in experimental and innovative directions. Post-punk’s ideological concern with the politicisation of the personal, and with identifying and promoting authenticity in the face of popular cultural stereotypes, lent itself to exploration from a feminine and feminist angle, resulting in lyrics which demystified and deconstructed conventional femininity, love, sex and romance, and which analysed social and cultural pressures on women or the tensions of personal relationships in implicitly political ways. END_OF_DOCUMENT_TOKEN_TO_BE_REPLACED

Now: I didn’t include any illustrations with the writing, because my grasp of decent visual art is comparable to Boris Johnson’s grasp of his handlebars after a heavy night out. But apparently it would be nice to have some.

Therefore: I’m looking for suitable images – photographs, illustrations, cartoons – for inclusion in the chapter. Anything relevant considered especially if it pertains to the bands mentioned. Full credit given, further details on request, please pass this on if you can think of anyone who’d care. Thank you.

Also: it is my birthday. I’m going to celebrate with fresh air and daylight.

* Of which there is an excellent overview here.

A spectre is haunting London. My daily commute, never a joyful affair, has recently been granted a further dimension of irritation by adverts on buses, hoving into view with tedious regularity, bearing the image of Meryl Streep dolled up as Mrs Thatcher in The Iron Lady. Thirty years on from her rise to power, and after a minor rash of small-screen depictions – Andrea Riseborough in The Long Walk to Finchley, Lindsay Duncan in Margaret – Streep will now portray her on the big screen, the prospect of which I could have happily lived without.

Having as I do firsthand experience of Thatcher’s impact, her government’s break with prevailing consensus and bloody-minded devotion to neoliberal orthodoxies, an objective and rational evaluation of the woman is probably beyond me. That said, her presumably impending death, although I do have a longstanding appointment at a pub in King’s Cross to dutifully raise a glass, is something I’ll be largely indifferent to. It won’t matter. Thatcher as a person has far less bearing on the current world than what she represents. The damage has been done, the battle lost, and much as I might appreciate a Truth and Reconciliation Commission into the 1980s, Thatcher and her co-conspirators are by now too old and whiskey-soaked to be held to any meaningful account.

Efforts to humanise Thatcher, even when they enlist Meryl Streep, seem discomfiting and deeply bizarre. What she means has transcended what she was, is and will be. The purpose of this post, therefore, apart from being an exercise in detachment for me, is to look briefly at some aspects of Thatcher’s image in political and pop culture, the effect of her gender in her role as a woman in power, and her political legacy. Quick, before the next bus goes past.

END_OF_DOCUMENT_TOKEN_TO_BE_REPLACED

Speaking of boredom, let’s start with Tony Wilson’s gloriously earnest and nonchalantly pretentious Buzzcocks/Magazine documentary from 1978. In many ways it seems far longer ago than that, what with girls who work in Woolworths and all that quaint smoking indoors. Don’t make ’em like this anymore, eh? END_OF_DOCUMENT_TOKEN_TO_BE_REPLACED

I’ve had coalmining on my mind recently. Contra last week’s Metro, I don’t think it’s accurate to say ‘the world looked on in despair’ at events at Gleision Colliery – in fact the story was predictably underreported and largely unremarked upon by my usual social media circle, until the story became a self-evidently human tragedy, whereupon it was hardly engaged with at any deeper level than that. Anyway:

As the admittedly lame title of this blog suggests, the coalmine for me is bound up with a certain sense of national identification, but also, if not more so, with class and regional associations. I feel that I have more in common with someone of my age from a post-industrial area in (say) south Yorkshire, than I might with someone from rural west or north Wales or indeed the great bright-lit sprawl that is Cardiff and the Vale. Weighted against this potentially mawkish shoulder-to-shouldering with other unemployment blackspots is the knowledge that this landscape as a functioning entity, as something that defined one as part of and in relation to a certain workforce, as the sum of one’s labour, has (been) altered out of all recognition and what it tends to be seen as generating now is dysfunction. But the mine as a symbol of shared frames of reference carries an inescapable emotional weight. END_OF_DOCUMENT_TOKEN_TO_BE_REPLACED

Simon Reynolds has decently condensed his new ‘un into a Guardian article:

The book is not a lament for a loss of quality music – it’s not like the well-springs of talent have dried up or anything – but it registers alarm about the disappearance of a certain quality in music: the “never heard this before” sensation of ecstatic disorientation caused by music that seems to come out of nowhere and point to a bright, or at least strange, future.

I don’t wish to dollop even further layers of irony on top of this particular trifle – but we’ve been here before, too, haven’t we? This is repetition, if not revival. What Reynolds castigates as ‘retromania’ has been sporadically identified throughout the past decade, most perspicaciously by several of my mates around about the point at which the third pint starts to make its presence felt, because we’re old enough to remember when revivals seemed novel, if only because this was the first we’d heard of them. END_OF_DOCUMENT_TOKEN_TO_BE_REPLACED

A rant, minor and ignorable. I get like this sometimes.

You know one of my earliest memories? My parents dressing me up in a bloody stupid costume in order to attend the street party that my town was holding in honour of the Royal Wedding of that clot the Prince of Wales to that vacuous brood-mare Lady Diana Spencer. All the children in my town were in fancy dress. Fuck knows why, it must have been a temporary madness. We’ve still got a sodding commemorative mug.

I was born in the 1980s. I grew up to get away from them. The only good thing about getting older was, I fondly deluded myself, that at least it wouldn’t be the fucking, fucking 1980s anymore.

And now what have we got? A Tory Prime Minister, unemployment through the roof, pointless wars abroad, strikes, bankers still raking it in and now a fucking, fucking, fucking Royal Wedding that we’re all expected to take a blind bit of notice of because it’ll take our minds off how SHIT everything is. And we will, of course.

And some of you are wearing bleached denim, crimped hair and the type of horrible moustaches more usually seen on sex offenders – not because it’s the perfectly laudable Movember, but because it’s in some way ~cool. Well, screw the 1980s revival in its overstyled Thatcherite ear. What the fuck are we doing as a nation?

Recommend Velvet Coalmine to others

Places I Write For: